We rumbled the BC tourist boards little scam they’ve been running for years. They show pictures of bears, you see YouTube videos of bears but I’m quite sure that Peter Jackson is behind it all with some mo-cap magic just like he did when he created Gollum in Lord of the Rings. We spent a perfectly lovely morning drifting down the Anartko River looking for bears and saw precisely none. Not one. Zilch. Nada. Dim. Apparently there are lots of black bears that come out at night…yeah of course, when we’re asleep. The grizzlies will be here in numbers very soon, any day now in fact…just not today (or yesterday for a couple that went on the trip yesterday too).

To be fair (and I was joking, honest) the bears are wild animals and are naturally wary of people. We saw a lot of (large) paw prints in the sand on the banks of the river and we also took a calculated risk in coming when we did as it’s right at the beginning of the bear season and the associated salmon run, but there you go. We did see bald eagles which I was happy about but that’s about it.

Afterwards we grabbed a sandwich and headed out with some recommendations on what to do for the afternoon. The salmon spawning season is underway in the lower part of the river and we went to see. Actually you can smell it as you get out of the car. Hundreds of large fish rotting in the water as seagulls pick at them and alongside those, males fighting between themselves over who gets to fertilise the eggs just laid by the female. After that job is done they too change colour and die. All circle of life stuff but sad and interesting at the same time. It really really does stink though.

Next we went to see a waterfall that Amanda was told about and she was quite interested as there was very little walking involved.  It was pretty impressive and just across the road was the main part of the river and the sun came out as we reached it. This is a very beautiful part of the world and any photographs really don’t do it justice. 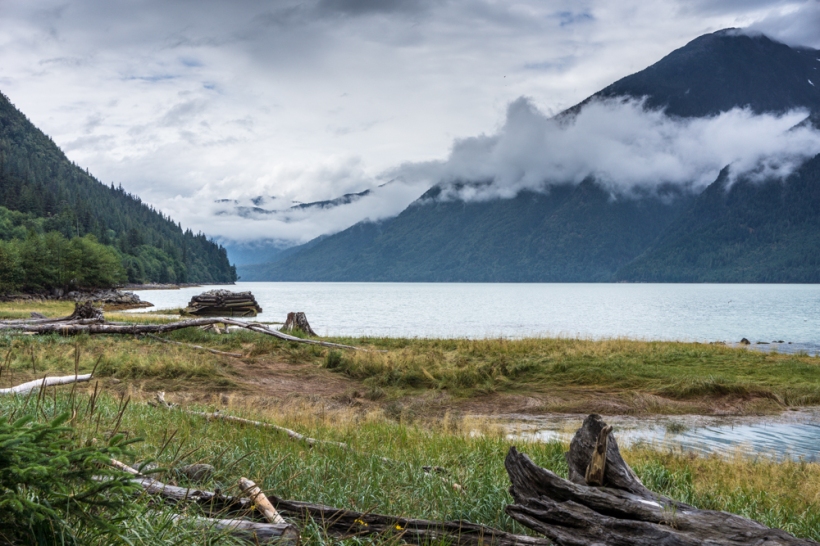 Lastly before heading back, we went to see some old growth cedar in a place called Walker Island park. These are examples of the trees that covered the entire area before the European settlers arrived at the end of the 19th century. Huge things. Really huge and magnificent. It’s good that they’re protected in many places now but sad that most are gone.

Tomorrow we leave Bella Coola and drive to Nimpo Lake. It’s time for THAT drive up THAT hill. Looking forward to it. We have a great excuse to come back one day (later in the season) so we can finally get to see some Grizzly bears.

PS Amanda dropped her iPad on her toe. It was very funny (to me) and painful (for her).